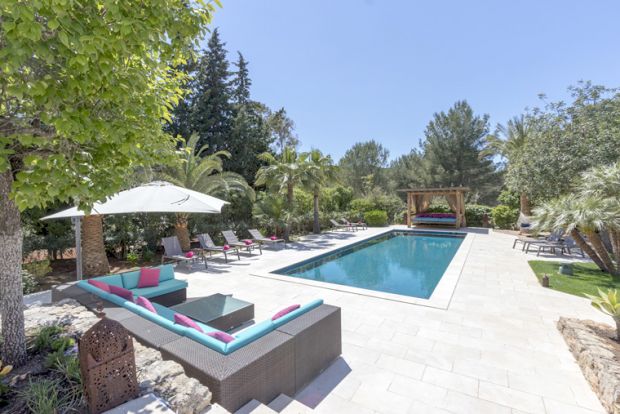 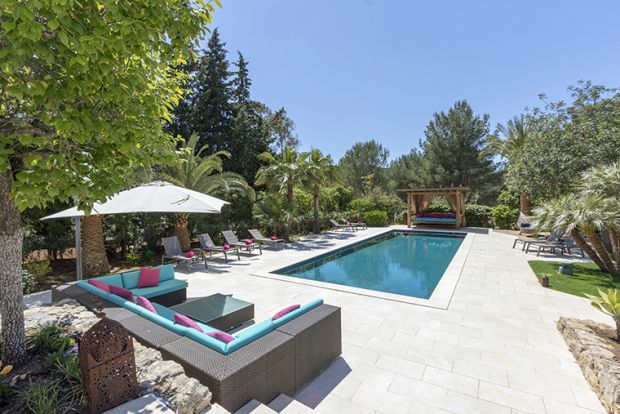 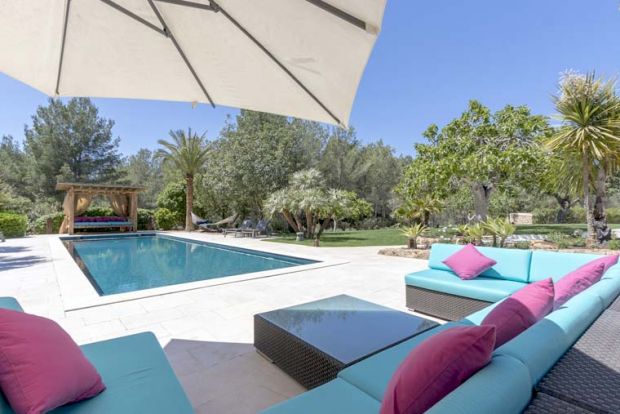 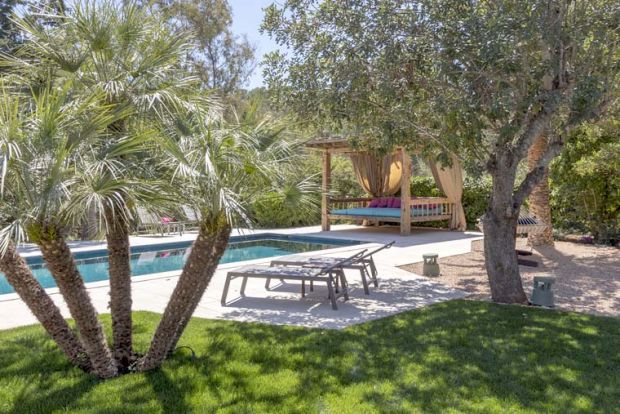 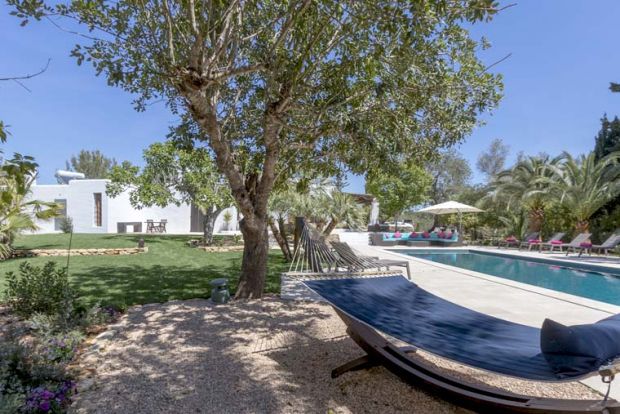 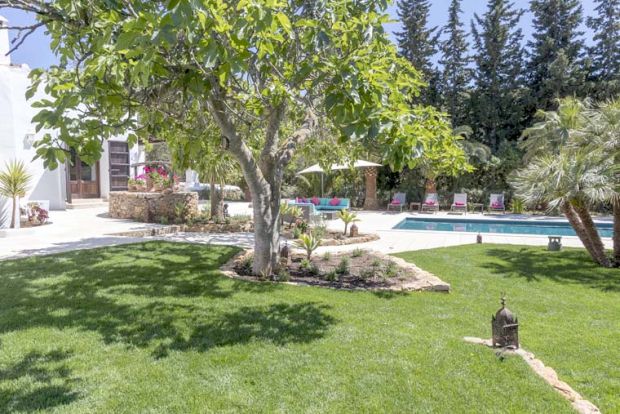 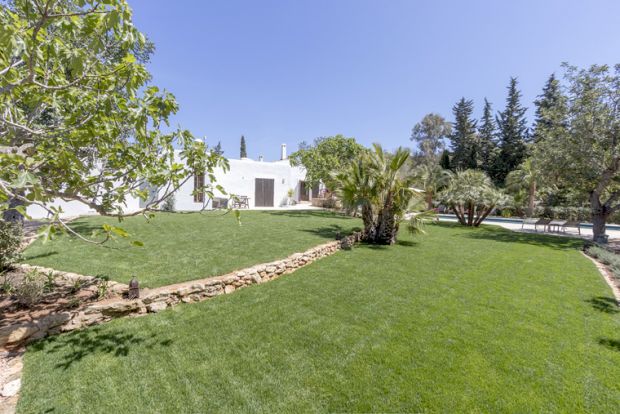 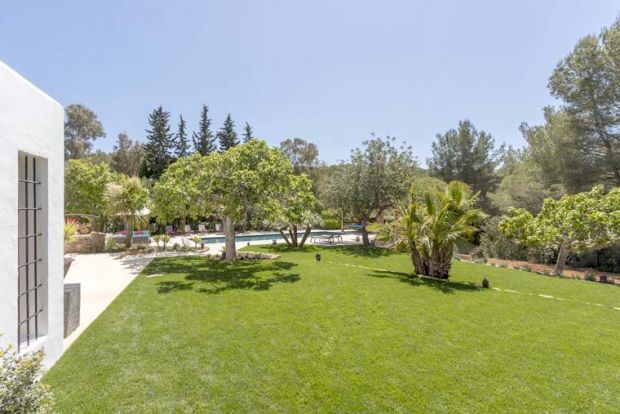 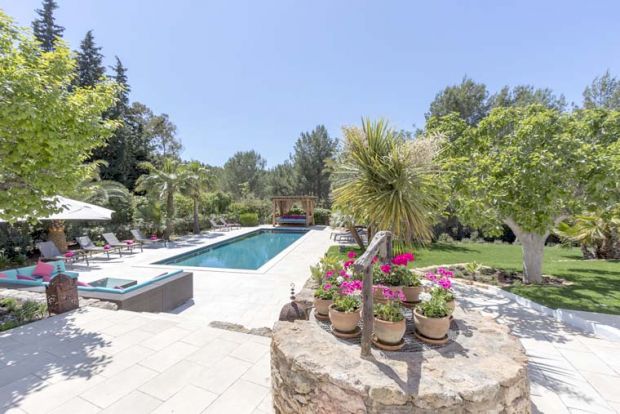 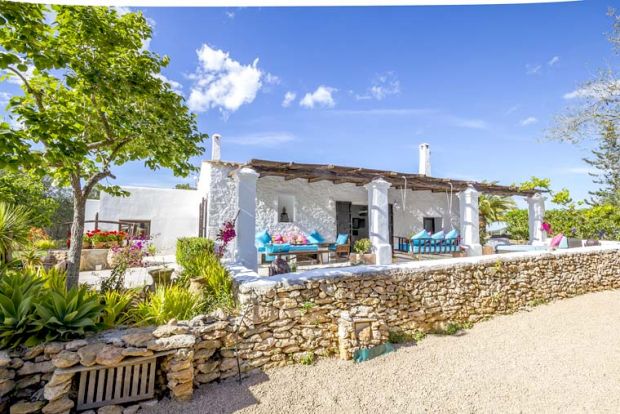 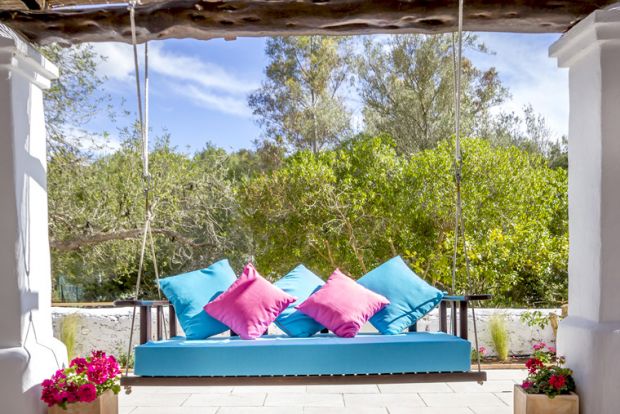 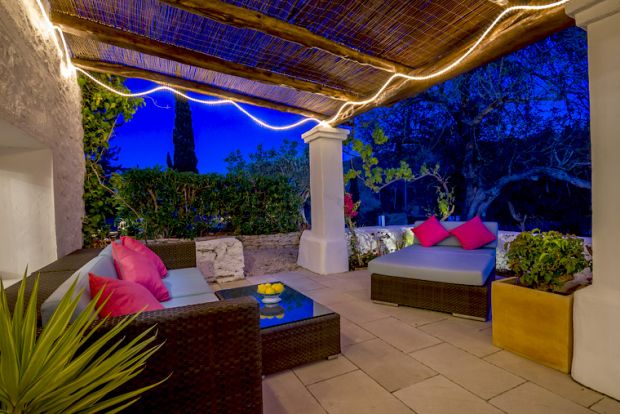 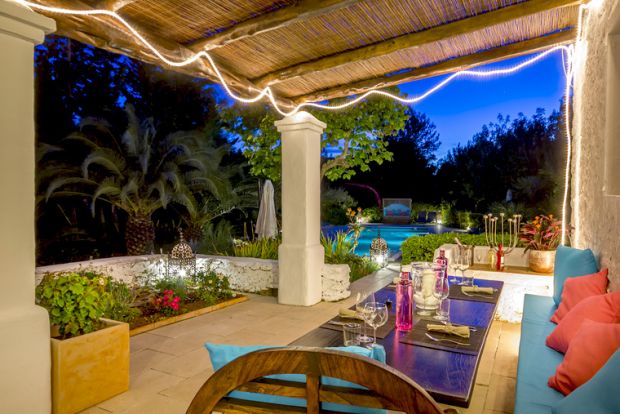 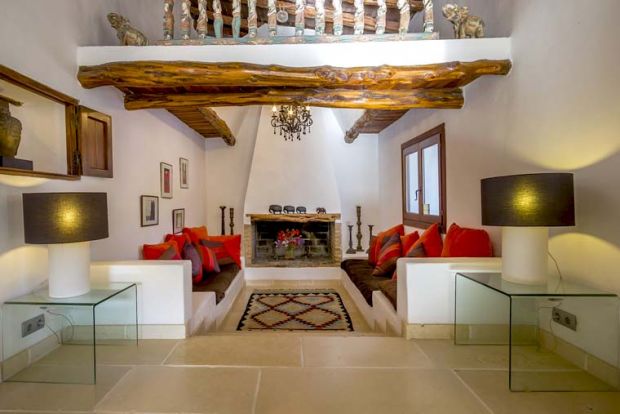 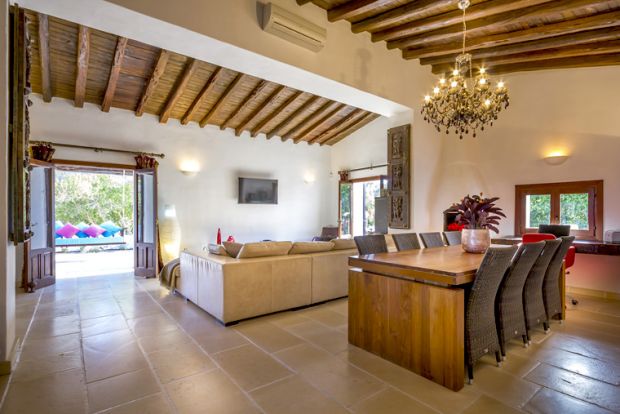 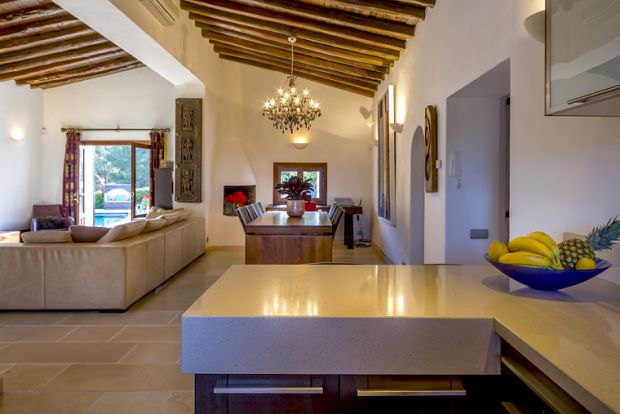 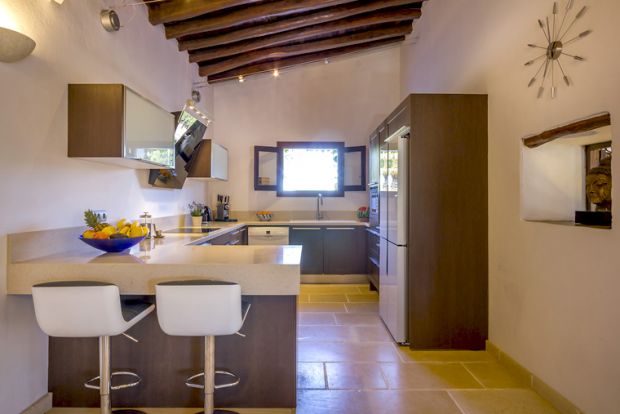 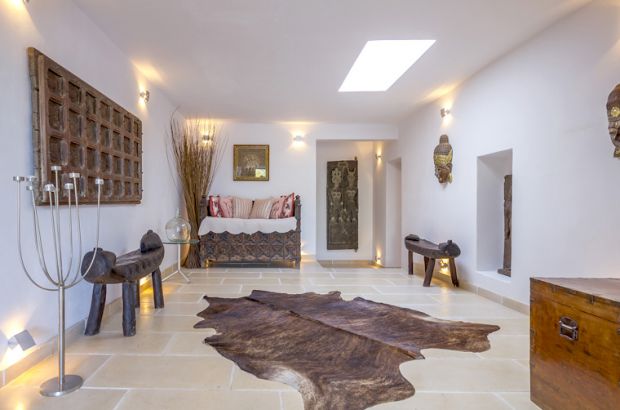 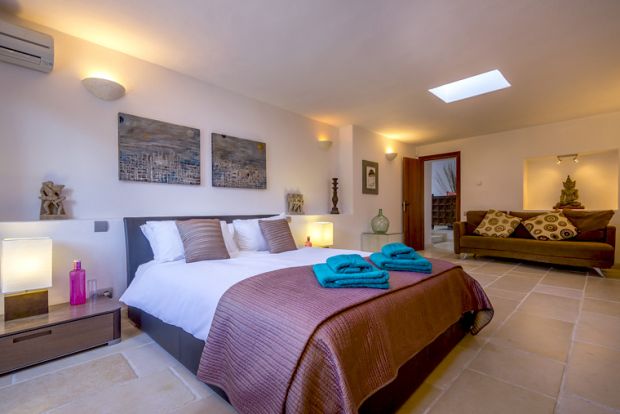 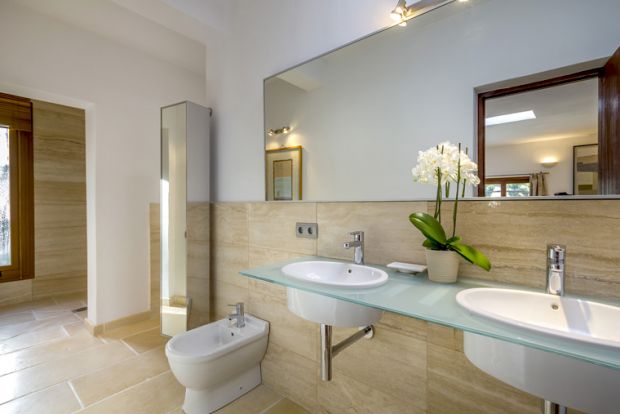 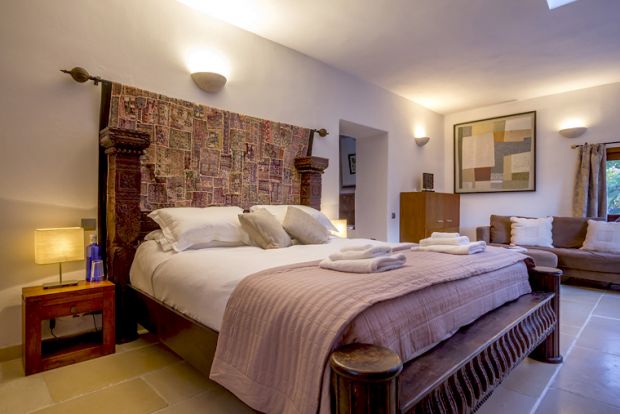 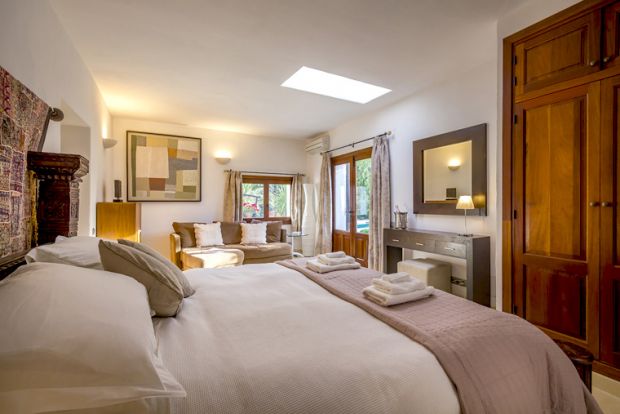 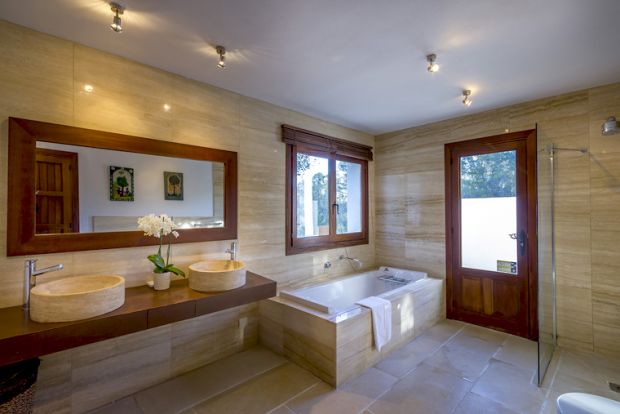 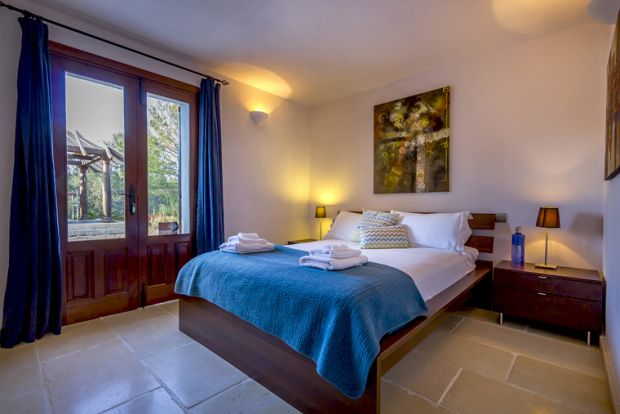 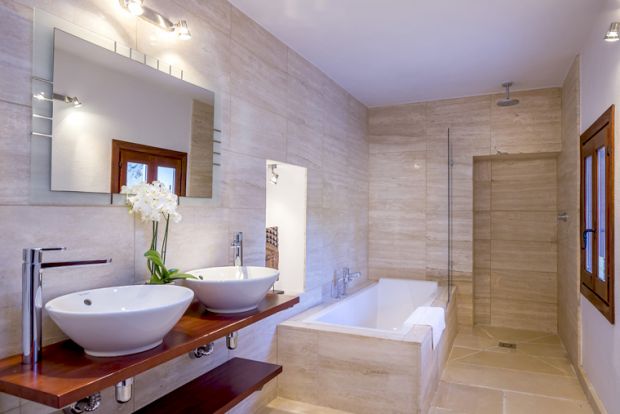 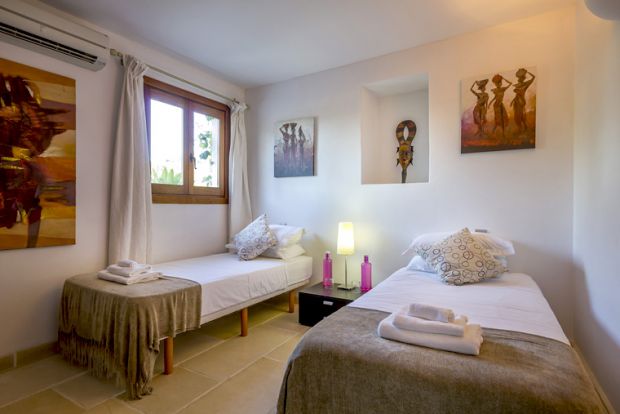 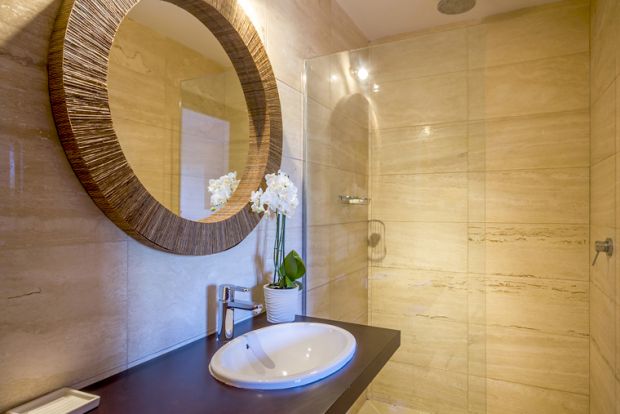 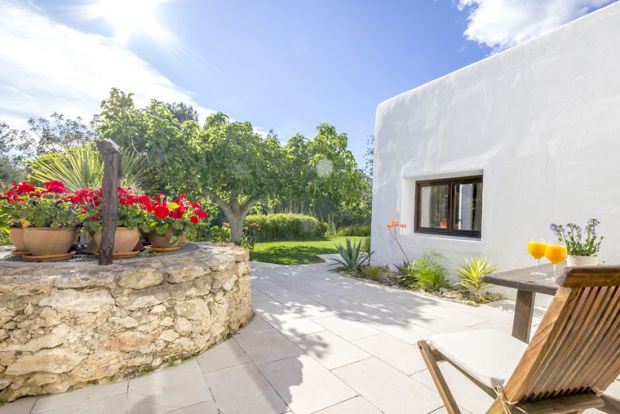 La Bleu is a two hundred year old traditional finca in a beautiful rural location. It is in a fantastic, peaceful location in the green heart of Ibiza’s countryside, between the charming villages of Santa Gertrudis and San Lorenzo. San Gertrudis’s restaurants, including Bambudda Grove, Aura, Macao and Ocho, are all within a few minutes’ drive.

The property has been sympathetically modernized to combine high-tech comforts with a wealth of charming features. The idyllic garden brims with mature trees and fragrant plants to create a secluded escape where you can soak up delicious Ibizan sunshine all day long. The charming gardens are also home to a Bali-style chill-out pavilion, with dining area, daybed, sofa seating and swing bench plus a smaller sun-drenched terrace seating area. The large pool is surrounded by tropical plants, loungers and a freestanding hammock.

Ibiza truly is unique and diverse. Since the hedonistic days of the 60’s and 70’s when it was a favourite of the hippy crowd to today as an increasingly popular jet-set destination offering some of the best beach culture, restaurants and nightlife the world has to offer. Due to its relatively small size, with a resident population of some 120,000 and an area of approximately 570 sq km it has been saved from the over development of many European destinations.

The 2 main resort areas of St Antonio and Playa D’en Bossa offer everything for the ideal family package. But the real ‘secret’ of Ibiza lies in its many beautiful beaches and secluded coves scattered around the island, crystal clear warm seas and fine sandy beaches with safe...


Read more
bathing and snorkelling. From the tiniest coves tucked away off the beaten track with rustic family run fresh fish grill restaurants to the super trendy V.I.P. venues of Cala Jondal (Blue Marlin) and Salines beach (Jockey Club) to child friendly beach clubs with crèches. No where quite does ‘chill-out’ like Ibiza. Of course spread amongst the hills there are idyllic private villas with easy access to the many little villages and towns. Here one will find everything from traditional family run pavement cafe / bars to uber chic world class restaurants and retreats.

The 3 main towns on the island; Ibiza Town, St Eulalia and St Antonio are as diverse as the island itself. Ibiza Town being the original fortified settlement dating back to the 1500, has a maze of narrow streets and alleyways rising to the cathedral of Dalt Vila, which stands on the site of the original church consecrated in 1235 after the Catalonian conquest. Today Ibiza is a busy port with 3 marinas hosting cruise liners and dozens of super yachts through the summer. A stroll through the streets must not be missed especially of an evening when it’s the place to see and be seen. The main square of Vara De Rey and adjacent Plaza Del Parque host a variety of shady pavement cafes and restaurants ranging from inexpensive tapas bars to classy brassieres. Here too the shoppers are satisfied with an excellent selection of private boutiques and designer outlets.

St Eulalia is more laid back and peaceful with a beautiful hilltop church dating from the 16th century and has the only river in the Balearics that flows out to the crescent shaped beach around which the town is built. Here too is a marina with a broad promenade backing the beach.

St Antonio and the bay area including Cala de Bou and Port Des Torrent on the western side of the island are perhaps most famous for ‘Cafe Del Mar’ and the sunset strip. Catering to families and the 18 / 30 crowd in the height of summer with many inexpensive pavement restaurants and bars. There is an excellent promenade running the full length of the bay passing the marina and beach with lively bars and beach cafes.

With its history stretching back through millennia from the early Phoenician settlements, Moor and Arabic invasions to the Catalonian conquest there is more than enough to interest the history enthusiast. Not everything however relates to the past. The nightlife for instance is one of Ibiza’s biggest attractions drawing the international party set from across the globe, with some of the biggest club venues in the world that attract all the top D.J.s and promoters. Privilege, Space, Amnesia, Lio and of course Pacha Ibiza; the flagship venue of this international brand attracting the rich and famous. There are also a number of smaller more intimate venues catering to all tastes and music styles.

The countryside of Ibiza is made up of fertile valleys surrounded by rolling hills, the highest point being Sa Talaia at 476 m. Covered by Mediterranean trees, pine, almond, fig, orange and lemon the island is green all year round. A self drive tour of the island by car is a must, with fabulous views around every corner; historic fincas (country farm houses), rich red earth terraced farm land and well maintained country lanes lead to whitewashed houses clustered around outlying churches. As for rainfall this is mainly from November through to April and totals around 350mm. The summer temperatures range from the mid 20’s in April / May to mid 30s in July and August back to mid 20’s come September / October. One of the characteristics of the Ibiza climate is the limited variation between day and night time temperatures which make for wonderful balmy summer evenings. . The sea temperatures warm from 21 degrees in May to 26 degrees in August and warmer in the many shallow sheltered coves.

Ibiza is truly a unique destination that caters for all tastes and ages. A real secret of the Mediterranean that many think is no secret at all – save for those in the know.